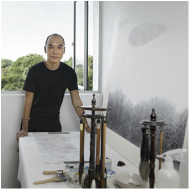 Terence obtained his Diploma in Fine Art from Nanyang Academy of Fine Arts in 1990 and thereafter, a Bachelor of Art (Design) with major in Multimedia from Curtin University of Technology in 1997. He pursued his Master in Electronic Arts from Middlesex University in 2004. He has learnt his art in Chinese ink painting from Singapore painter Tan Oe Pang.

Terence participated in various competitions and exhibitions both local and overseas such as Australia, China, Hong Kong, Philippines, Taiwan and United Kingdom. He has recently participated in Art Stage Singapore 2015, Hong Kong Affordable Art Fair 2015, Singapore Affordable Art Fair from 2011 to 2015 and showcased his work at Forest Rain Gallery in 2010. He held his first Contemporary Chinese Ink Solo Exhibition at the Utterly Art Exhibition Space in 2003.

Terence's series of paintings is inspired by the urbanisation of the environment and the relationship between man and nature. His works have gained wide interest and collected by Singapore and foreign buyers.